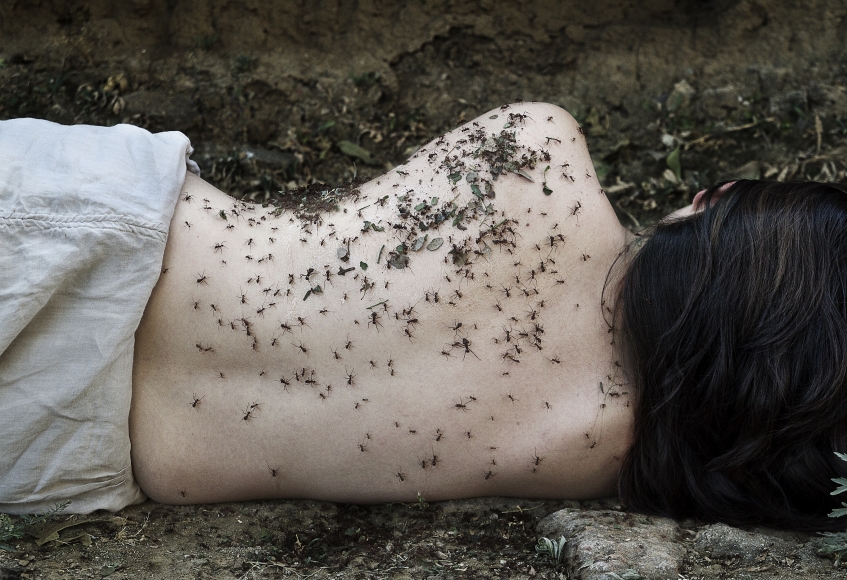 Karina Juárez (b. 1987) is currently enrolled at the Universidad Autónoma de México (UNAM) as an art history major, and also leads Errante Laboratorio, a virtual space of investigation and diffusion of contemporary photographers. She has received training at the Manuel Álvarez Bravo Photographic center and the San Agustín Arts Center (CaSA), and was a fellow in the Young Creators of the National Fund for Culture and Arts (FONCA) in photography in the 2011 and 2014 editions. She has received a number of honors and inclusions, including honorific mention in the Contest of Contemporary Photography of Mexico (2012) and the Eight Biennial Puebla de los Ángeles 2011. Her work has been featured in numerous collective and solo exhibitions in Mexico, Belgium, Brazil, Ecuador, Spain, Germany, Honduras, and France.

WTR: Does your work relate to those previous life experiences in any way? What does it mean to be a photographer for you?
KJ:  My work all the time is in relation to my life, with the fears, the obsessions and with the memories of the past years and of what I am living.  For me to be a creator means that every day can be different, to be able to escape a bit from reality while I am building that other world that I want to be looked at. And also, it is a commitment.

WTR: Did you choose the photograph or does it chose you? When did you start calling yourself a photographer and visual artist and what motivated you to do it?
KJ:  I think I was looking for something, although I was not sure of what.   I had a kind of anguish to say things, so when I started taking pictures it was really wonderful because I could finally put the ideas I had into images.  Although all the time I’ve had a kind of love-hate with photography, I’ve also had long periods in which I have not been able to produce anything, but in the end the anguish comes again with everything that I cannot contain in life, and I start to take pictures again.

WTR: Is your work influenced by other visual artists? Which artists do you respect or admire the most? Do you feel that your work is similar to theirs in some way?
KJ:  Yes, my work has been definitely influenced by many photographers in several periods, and some have been my teachers, not only of photography but of life. Mary Ellen Mark was one of them.  She is someone who helped me believe in the strength that my work could have and that I had to keep on producing, but above all, being honest with what I was doing.
Per Bak Jense is a Danish photographer who came to give a workshop in Oaxaca. I lived there in those years. My vision of photography changed completely after that encounter.  One of the exercises that he would assign to us was to make a self-portrait.  That was the first time that I did that. After looking at myself in that self-portrait, where my head was placed inside a bubble, everything changed. He brought his books and when I saw them, I knew that I wanted to do that. They were images that seemed to contain nostalgia, but at the same time they were very powerful. From that moment I sought for my photos to contain that kind of strength, as if it were a pause, a kind of respite.  I hope one day my work will become similar, not in form but in what it contains and in what it provokes.
WTR: What motivates you to create? Do you ever have moments when you are not satisfied with your abilities or face creativity blocks? How do you deal with those moments?
KJ:  I have blockages all the time, but, above all, my insecurities about my work do not allow me to move forward when I think too much about what follows or about the expectations of the  work. It is necessary to allow the work to take its own path.  I constantly go back to my first images. I think there I find answers to move forward although I also have a series of processes that allow me to move ahead and not paralyze myself. I always look for fears, untold stories, news, and dreams. Those allow me to have a subject with which to work.